Window Treatments from A to Z: Terms to know when specifying 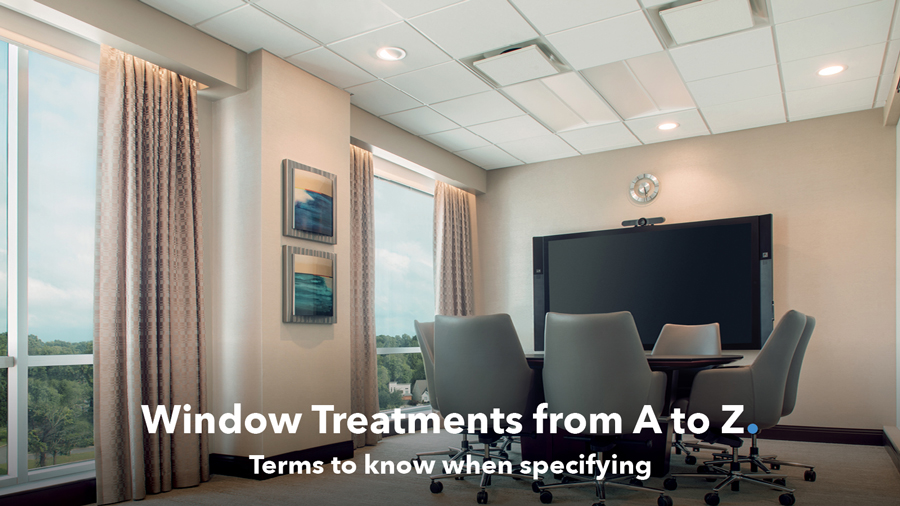 Specifying window treatments involves a lot of small details – from the way they are mounted, operated and hemmed to the measurements inside and outside the area of the window. So it’s no surprise that there are a lot of important terms to know!

If Jabot, Lambrequin and Swag sound like made up words to describe window treatments … we assure you, they aren’t! Here are the A-Z’s of Window Treatments that will have you better prepared for your next drapery or window top treatment project:

Blackout Lining- Lining fabric that has been laminated to block out light.  The laminate makes the lining heaver and stiffer than standard lining.  Available in 2 and 3 pass.  It is most often white or cream.

Clearance – Distance from wall to back of the rod.

Directional Fabric- Fabric that has a specific orientation due to pattern, nap or weave that needs to be considered.

Fullness – Extra fabric added to the finished width of the window treatment.  Example:  100” finished width would need 200” of fabric width hemmed to achieve 2 to1 or 100% fullness.

Give – Allowance added to finished drapery width to allow panels to traverse easily.  General rule is 1” – 2”.

Heading – Hemmed, usually stiffened portion across the top of a drapery.

Inside Mount - Treatment is mounted inside the window frame, so that it is recessed within the window opening.

Jabot - Fabric that is folded and falls in a zigzag fashion down the sides of a treatment.  Cascades are most commonly used with swags.

Kick Pleat – Pleat formed like a box pleat in reverse, so the edges of the pleat meet in the middle on the face of the treatment. Also known as an Inverted Pleat.

Lambrequin – Box-like structure typically made of wood stained, painted or upholstered with fabric. Unlike a cornice, a lambrequin continues down the sides of the window.

Outside Mount - Treatment is mounted outside the window frame on the wall or casing surrounding the window.

Projection – Distance from the wall to the front of the drapery rod or valance board.

Return – Part of a drapery, cornice or valance that turns around the sides for a neat finish and light control.

Swag – Draped fabric folded to form pleats and a scallop shape on the bottom.

Traverse – To draw across.  A traverse drapery is one that opens or closes across a window by means of a traverse rod.

Valance – Soft fabric skirt that hangs from the top of a window.

Width – Describes a single width of fabric.  Several widths of fabric are sewn together to create window treatments. The term is also used when referring to the “rod width” or “finished width”.