Why You Need to Get Passive on Fire Protection

Fire Barriers are part of a joint effort to save lives 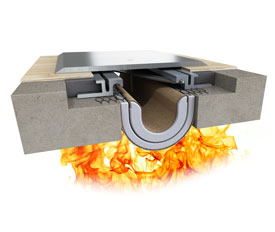 Often, people think of fire protection systems for buildings in the active sense – meaning systems like sprinklers and extinguishers to suppress or actually put out fires. Of course, detection and alarm systems also fall into the active protection category.

However, there are also passive fire protection products and assemblies that can be put into buildings to also slow the spread of fire – such as fire-rated doors, walls and so on.

An often forgotten passive system is the expansion joint fire barrier, which can also play a critical role in helping building occupants safely evacuate a structure by compartmentalizing heat, smoke and flame.

A secondary function is to limit damage and preserve the building if possible, but that is a distance second – the main goal is to get everyone out alive and unharmed.

According to the NFPA, 2 of 3 death certificates show smoke inhalation as the cause of death compared to burns.  A fire can produce an enormous amount of positive air pressure.  Smoke can quickly shoot through holes and gaps to flood adjacent rooms, corridors and floors, which in turn hinders occupant evacuation.

So, to reiterate, expansion joint fire barriers, when installed and sealed properly, help to slow the spread of smoke, heat and flame.

A good analogy to PFP in a building is the bulkheads and watertight doors on a ship.

Much like the function bulkheads perform on a large cruise ship, a flood in one compartment is not allowed to migrate to any adjacent spaces unless it breaches an impregnable wall. When this occurs, the amount of pressure created by fluids attempting to move from high pressure to a lower pressure area is immense.

Designers recreate this concept of compartmentalizing spaces within a building to keep them segregated from each other in the event of fire. Instead of bulkheads, UL Rated assembles- such as concrete or composite horizontal decks, gypsum wall assemblies, rated shaft walls, etc. are used to protect building occupants. And expansion joints are filled with rated fire barriers. 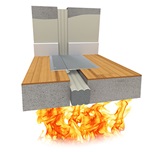 We also offer a one-hour AIA CES course on Fire Barriers.  To find out more, click here to request a course.