Biophilia … it’s for everyone … in every space

Seems one can’t pick up an architecture or interior design magazine these days and not come across an article referencing biophilia.  Certainly in the last few years this concept has become part of the main line buzz in design circles.

It might be good for us to kind of go “back to the roots” by revisiting the founding definition or principles of biophilia.

The good folks at Merriam-Webster define it thusly:

Definition of biophilia: a hypothetical human tendency to interact or be closely associated with other forms of life in nature.

Another definition comes from simply breaking down the basic Latin roots of the word:

In a nutshell, biophilia has come to mean:  Love of living things.  A close corollary would be:  Love of nature.

What is biophilic design?

Biophilic design is a concept used within the design profession to increase occupant connectivity to the natural environment through the use of direct nature, indirect nature, and space and place conditions.

The theorists argue that this approach taps into the hard wiring of human being who, over the span of historic time, have developed an affinity for the life-supporting aspects of the natural world.

The idea then is to allow building occupants to have direct access to nature – for example, a rooftop garden, adjacent nature walk, or a garden courtyard, or to allow them to experience nature when outdoor access is either unfeasible or impractical – natural views, graphics and imagery, etc.

If there was a landmark inaugural study of biophilia in healthcare design, it might be thanks to Dr. Roger Ulrich of Sweden.  In an article in Commercial Architecture (Feb. 2016), Senior Editor Ken Betz, writes:

Roger Ulrich, Ph.D., EDAC, a professor of architecture at the Center for Healthcare Building Research at Chalmers Univ. of Technology in Sweden didn’t use the term biophilia when he did a study in 1984 that suggested simply that surgery patients recovered better in rooms with a view through a window. But “what few realize is that Ulrich’s famous study was essentially about the impact of biophilic design on the built environment,” said David Navarrete, director, research initiatives, The Sky Factory, Fairfield, IA.

Catie Ryan expanded on the importance of Ulrich’s classic study, which measured the influence of natural and urban sceneries on patients recovering from gallbladder surgery. “Some patients were provided with views to nature, whereas others looked at brick walls. With all other variables equal, his findings revealed accelerated recovery rates and reduced stress for the patients who had views of nature. On average, patients whose windows overlooked a scene of nature were released after 7.96 days, compared with the 8.71 days it took for patients whose views were of the hospital’s exterior walls to recover sufficiently to be released—a decrease of 8.5%,” she said.

Those are some impressive numbers, to be sure.  We feel confident in saying that utilizing nature as a healing distraction benefits all ages of patients. By allowing the lines between interior and exterior to blur, the benefits of the outdoors can be brought inside. Similarly, accessible outdoor spaces that carefully address safety concerns can be calming, positive and therapeutic distractions.

Bringing nature into the office space

What most designers agree on is things like daylighting and access to natural elements (direct or indirect) can have a positive effect on a person’s mood and productivity.  And nowhere is this lift needed more than in the office environment, which is usually depicted stereotypically as cubicle “farm” with overhead fluorescent lighting.

When it comes to office design, one school of thought says to go lean – strip away all extraneous decorations to allow maximum flexibility to shift and configure the space to accommodate staffing changes, etc.  The challenge with this lean approach is it runs counter to other research showing that workers’ quality of life can benefit from biophilic and other design elements incorporated the workplace.

A 2014 study published in the Journal of Experimental Psychology: Applied tested these two competing approached through the use of field experiments.  In the end, green won over lean … from the research paper:

The results demonstrate how office landscaping strategies that involve transforming a lean office into a green one contribute not only to employee welfare but also to organizational output. Lean, it appears, is meaner than green, not only because it is less pleasant but also because it is less productive.

So, just add plants, or are there other tactics to employ?

Many biophilic design studies focus on the use of living “green walls” and the inclusion of greenery and other living plants in the space.  These approaches have tremendous merit in improving mood, air quality and the overall appearance of the space.  We can’t argue with this approach at all.

But, what if there just isn’t the space for a green wall or planters with greenery?

We would argue there are numerous other ways to help bring the outdoors in.  Here are three design elements to foster biophilia:

Imagine turning nature scenes into whole-wall imagery or using large graphics to inspire and give hope. Aspex® Printed Wall Protection combines high resolution images with durable wall protection. The beauty of the product is in the unlimited options available to the designer.

Along with endless design ability, Aspex provides high-impact durability to your wall and clear, crisp imagery of digital printing. The graphic is back-printed onto the clear sheet you don’t have to worry about the image being scratched over time. 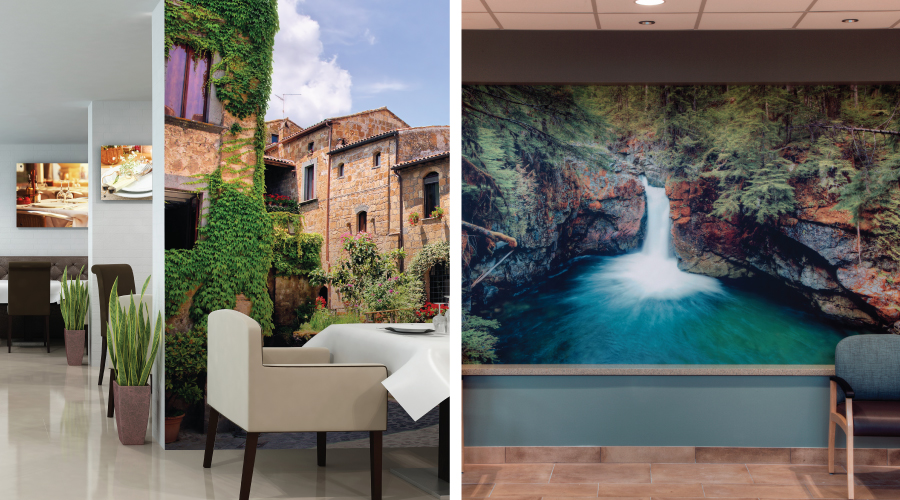 Nature scenes can beneficially reducing stress.  One options for windows with a less-than-ideal view is to incorporate printed images into roller-shade fabrics. 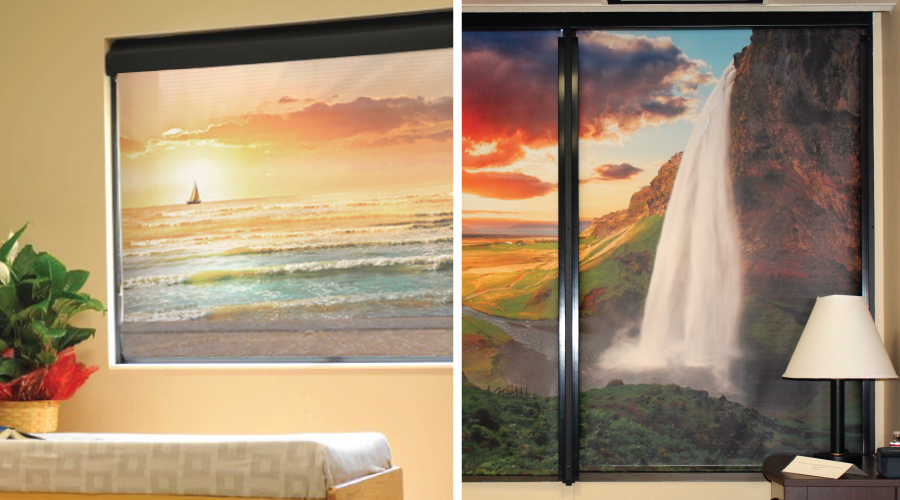 As reported in Buildings magazine (December 2018), a study of 7,600 respondents in 16 countries reported that “window views of greenery and water were linked to lower stress levels compared to greater stress levels for employees without a window.” Allowing daylight in improves overall mood and worker productivity.  Shade fabrics with higher openness factors can reduce the sun’s glare and heat gain, yet still allow for outside views. 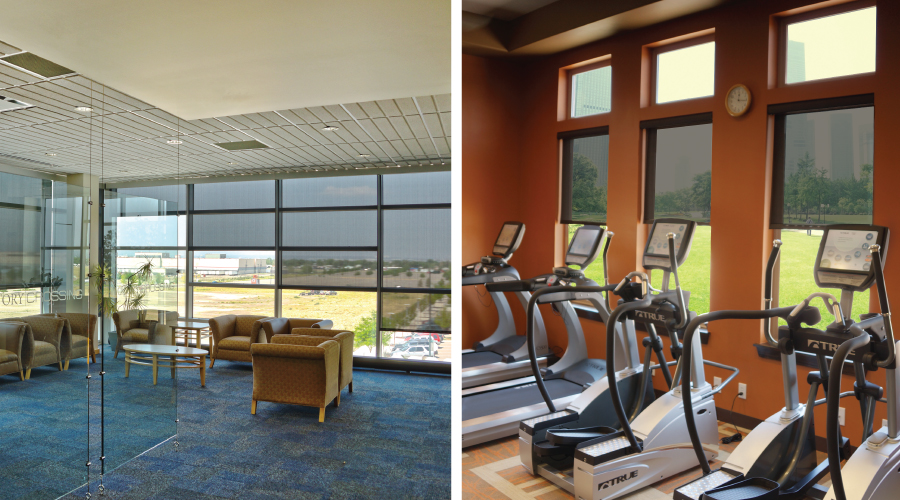